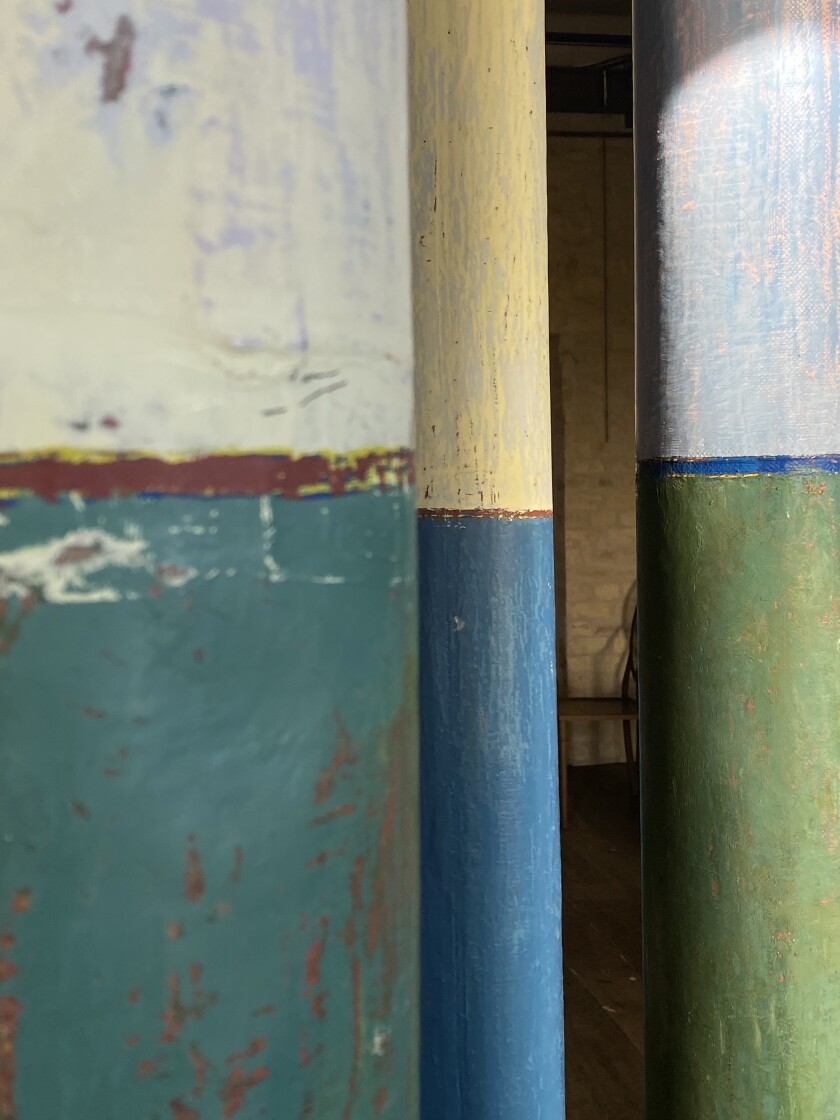 “Stingy form. And it depends on us how to diversify and fill it with content.

Only I still can’t understand the role of this thin line in the middle, does it unite or divide? “

Serhiy Zvyagintsev’s works, at first glance, can be confused with abstract paintings, or with installations, in the case when they are exhibited in rolls. The viewer sees a wonderful painting – exquisite gammas combined with a carefully crafted texture. It is a pleasure to contemplate quality things.

The depth of ​​the exhibition’s concept begins to unfold later, when you notice that all the works have a common compositional feature – the division in half by a horizontal line. This constant repetition suggests that you should not calmly switch your mind to a comfortable rest in the midst of decorative colors and textures. Something more significant is hidden by the artist in these works. So, we have a riddle: what is it?

During the preparation of the exhibition, I had the opportunity to ask the author what he depicted. His response began with the words, “Everyone saw it every day.” Indeed, most riddels (perhaps all) are about ordinary things, but snatched from the flow of everyday life due to an unexpected point of view. For example: “Through the water he passes over, and he himself does not leave.” Indeed, everyone has seen the bridge, but here we are talking about it without the usual context, which obscures our perception, and, in the end, makes this bridge completely invisible. Bridges, houses, trees and many other things have long since “sunk” and ceased to exist for us in everyday life.

Serhiy Zvyagintsev’s visual mystery is solved through childhood and adolescence memories: the walls of the kindergarten … the walls of the hospital … the walls of the kitchens and corridors … They were painted with oil-based paint, divided in half by a thin line of color, barely compatible with the two neighbours. Oil-based paint did not differ in brightness of colors, and over time it quickly aged, faded and even acquired a certain nobility of centuries. Such walls, with a condescending romantic view of reality, could resemble medieval palimpsests of manuscripts with dozens of layers of inscriptions, drawings, corrections and additional colors.

However, only children and adolescents felt the importance of these inscriptions and drawings. Waiting in long lines, hours in corridors, clinics, hospital beds, military units, in the absence of other images, made me look closely at the painted bare walls and look for patterns of cracks and draw random lines in the silhouettes of people or animals. .

Over time, after several repaints, layers of paint of different shades were superimposed on each other, forming a complex color and texture painting. Over the years, adjustments were made – the clarity of the lines was lost, the rigidity of the ubiquitous tricolor was softened.

The same walls in the porches became a surface for creative action, expression and communication with peers. It was there, in the absence of cafes or discos, that the first dates took place. Painted walls acquired a state of abrasion from their backs or shoulders (for example, as in the work “Pink Love”). The surface of the walls in the houses left by the residents for a long time kept the imprints of the lively life that once raged on its stairs. The acquired form continued to indicate a past phenomenon.

At the exhibition “Form” by Sergei Zvgintsev visual memories are enhanced by a well-found image of time – the walls are rolled, like the sky that rolls an angel in the famous image of the twelfth century in St. Cyril’s Church in Kyiv.

Serhiy Zvyagintsev’s works share another, more significant feature with medieval art. Like icons, in which the upper world is not depicted, but is given in its immediate presence, so in the works of the exhibition “Form” things are not painted on canvas, but reproduced. The last observation forces us to call these artefacts not paintings, at least in the traditional sense of the word. These objects are something closer to installations, despite the flatness of the materials involved.

Serhiy Zvyagintsev’s works appeal to the distant experience of every spectator and the memories acquired in childhood and adolescence. To reflect on the time that rolls up these memories like an angel rolls up the sky.

And these are works that are able to unroll rolls of memories over and over again.